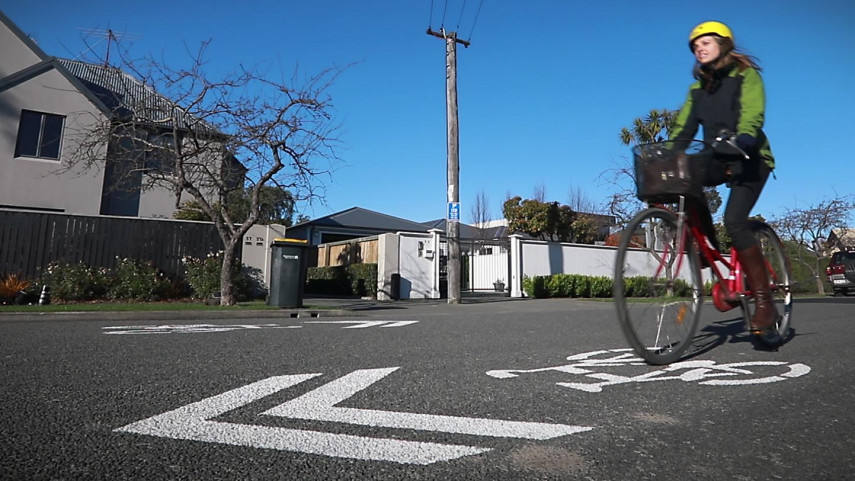 Cyclists and drivers can expect some changes to their journeys over the next few months, as a series of new road markings spring up on streets around the city.

Christchurch City Council Transport Operations Manager Aaron Haymes said the new signs would be cropping around the city as part of the Major Cycle Routes currently under construction, and all road users would need to educate themselves on how they worked.

New "share arrows" would be painted in the centre of road lanes in 30 km/hr zones around Christchurch. These arrows - known as 'sharrows' - indicate a shared road space and let drivers know that cyclists have access to the entire lane if necessary, to avoid other hazards.

Sharrows are an internationally recognised symbol, with the name first coined in San Francisco in 2004.

“Council is investing in 13 new Major Cycle Routes being constructed around the city over the next seven years," Mr Haymes said. "This is part of a Council investment of $156 million to encourage people to use cycling as a commuting option. Already we have seen a 29 per cent increase in cycle trips in the city over the last year. The new signage and new share arrows are all part of the change and we need everyone in the city to get their heads around the rules – cyclists and drivers.

“Share arrows show that the road space is to be shared between people on bikes and people in cars. They will usually be in a 30km km/ h speed zone and people on bikes are encouraged to ride towards the middle of the road to avoid hazards like car doors opening and storm water grates.”

Share arrows were already in place in the central city on Colombo Street, and on the Uni-Cycle Route between Riccarton Bush and the University, and will soon appear on the Papanui Parallel in Trafalgar Street.

New cycle and pedestrian priority crossings would also pop up on routes around the city, and drivers were urged to become familiar with the rules.

“We’ve created a video to help explain the new signage, and we’ve got a webpage that people can refer to if they are looking for an explanation of the rules.”

“We are seeing a huge increase in cyclists across the city, and as part of that we need to educate all residents on the changes to roadways and cycle ways. It’s an incredibly exciting time for Christchurch and we can’t wait to see the cycle network come into play as more of the Major Cycle Routes begin to link across the city.”