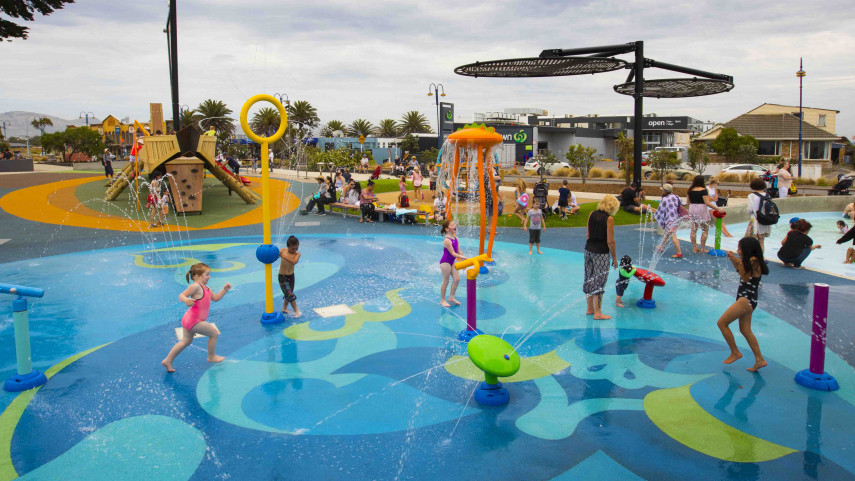 New Brighton’s playground is proving a holiday hot spot attracting hundreds of people a day to the suburb.

The beachside playground with its distinctive whale opened on 20 December with over 400 people attending the ceremony. The New Brighton Beachside Playground is proving a hit with families.

It's the first part of the New Brighton Regeneration Project to open and the project was delivered ahead of time and under budget.

Development Christchurch Chief Executive Rob Hall said in its first few weeks the playground had been highly successful and it was very encouraging that it appeared to be drawing people from other parts of the city to check out the new attraction.

“From what we’ve seen and heard, busy days can easily attract hundreds of people to the playground – many of whom are visitors to New Brighton.”

Coastal Ward Councillor David East said the playground’s popularity had beaten his expectations. “I thought it would be pretty popular but there have been far more people there than I imagined on a daily basis.

“It’s certainly been a great addition to New Brighton and all the reports I’ve heard are exceedingly favourable – everyone’s raving about it.”

He estimated that over the course of a busy day there would be up to a thousand people there. “It seems to have put this part of Christchurch on the map again.”

The New Brighton Beachside Playground has a mixture of wet and dry play areas and novel play equipment including a large rope climbing frame, water cannons, musical toys and a large waka that children can climb and play inside.

Local school children and community members had input into the design and there was overwhelming feedback that the iconic whale should be retained.

The 600 kilogram whale in the new splash pad play area is a clone of the original, which was too considered too fragile to move to its new location.

Ground artwork, carving on the waka, wind protection screening, and some new play features will be added progressively to the playground in the next few months.

Later this year work is expected to begin on the Christchurch Hot Pools and Brighton Mall as well as streetscape work on Marine Parade to continue the revitalisation of the suburb.