Note in a bottle found hidden inside Citizens’ War Memorial 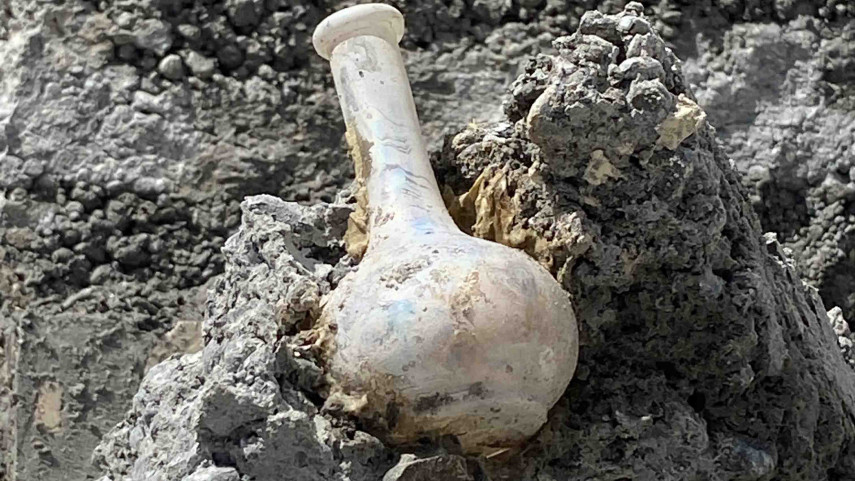 A small hand-written note listing the names of the original stonemasons who worked on the Citizens’ War Memorial has been found encased in the concrete core of the historic monument.

This note was found inside a glass bottle encased within the Citizens' War Memorial.

The 85-year-old note was tightly rolled-up inside a glass bottle that was found by pure chance when the Citizens’ War Memorial was being deconstructed last year.

“The contractor was working on dismantling the concrete core of the memorial when a big chunk of concrete broke off, revealing the glass bottle. If the concrete had not broken in that exact spot, we would never have found it.’’

The glass bottle was handed-over to a team of conservators from Canterbury Museum, who delicately drilled through the bottle’s glass stopper to try to reach the note inside. However, the neck of the bottle was too narrow and the note too fragile because some moisture had seeped in.

They had to wait several weeks for the rolled-up piece of paper to dry out before they could have another go at extracting it. When the note was finally unfurled it was clear some of it had disintegrated, but still visible were the handwritten names of five stonemasons who worked on the memorial.

Also clear was the date the note was written – February 1937.

“The note is a bit worse for wear but it is an amazing link to the past that could easily have laid undiscovered,’’ Mr Smith says.

“I think what this note shows is that the original stonemasons were very proud of being part of building this memorial to the men and women who lost their lives in World War 1 and they wanted their role in the project to be remembered.

“I am delighted that 85 years on we have recovered the note they hid and can publicly acknowledge them for their skilled workmanship and the part they played in creating this cherished memorial,’’ Mr Smith says.

For the team of stonemasons working on the restoration and relocation of the Citizens’ War Memorial, the discovery of the note is particularly special.

“This discovery is a reminder of the rich history and tradition we’re helping to preserve. It is humbling to be working on such an important memorial,” says Goldfield Stone stonemason Regan Shanks.

The Citizens’ War Memorial was deconstructed so that it could be restored and relocated to a new spot in Cathedral Square, near where the Police Kiosk used to be.

The Council is aiming to reveal the restored Citizens’ War Memorial in its new location in time for Armistice Day commemorations. From the outside, the restored memorial will look exactly as it did when first erected, but the internal structure will be newer and stronger to ensure its longevity.

Mr Smith says there are plans for a time capsule to be inserted underneath the pavers in front of the restored memorial.  A photograph of the original stonemasons’ note is likely to be included in the time capsule.