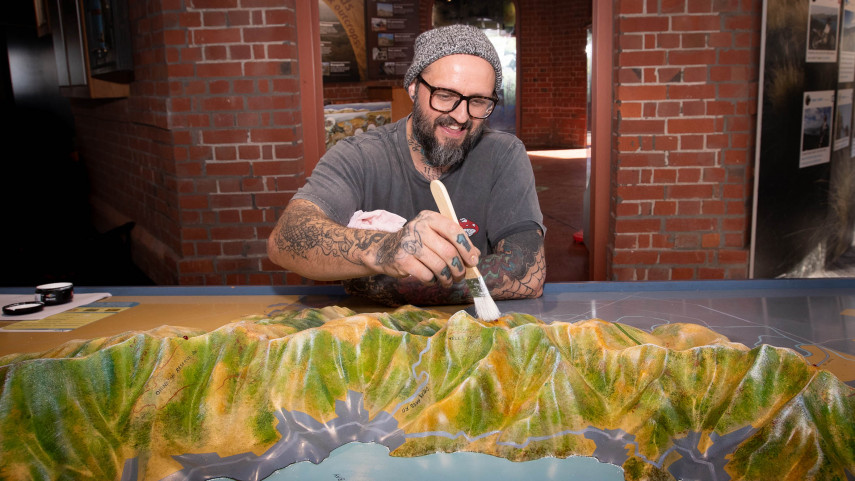 A lot of attention to detail and a dash of nostalgia. Those are the key to the work artist Mike Beer aka GhostCat is doing in situ restoring the miniature model of the Port Hills at the Victoria Park Visitor Centre.

The model was originally created by Judith Streat and installed as part of the Visitor Centre upgrade in the early 2000s.

“It was really nice to see some of the most popular places and trails had worn away on the model as you could literally see where people had traced their pathways,” Parks Programmes and Partnerships Manager Kate Russell says.

“But after more than 20 years, the model was at the end of its life and it was time for a refresh.”

The work is being done by Beer who has found his niche in miniatures.

“I usually do more urban work, miniature objects, buildings and city stuff so this was a bit out of the ordinary for me,” he says.

“It’s not like these jobs come up very often. I’m stoked to be doing it. The Port Hills are such an iconic part of Christchurch.”

Over the five days he’s been working on it, he’s been focussed on making it look as realistic as possible.

“The process is all about building it up in layers. You start with the landscape, the trees and the scrub before you add detail,” Beer says.

“Then we’ve added the tracks, more details to the outer areas like the sea of Lyttelton Harbour and the roads, even some froth in the ocean where it would hit the hills.”

As well as restoring the model, it’s also being updated with more accurate track locations and Māori place names.

“This project is part of a wider refresh of the centre which will also include Māori content such as providing access to the Ngāi Tahu Atlas and sharing the story of the Māori relationship with the Port Hills,” Ms Russell says.