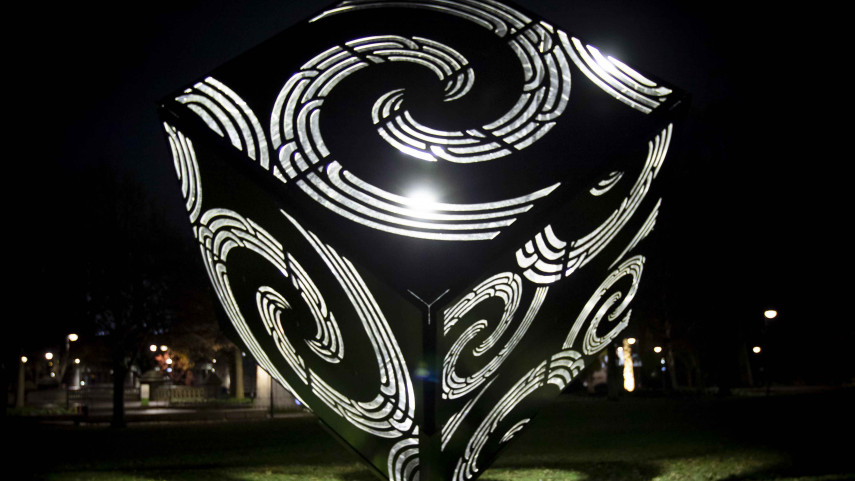 The series of six cubes were designed by artist Hori Mataki, from Ariki Creative, and manufactured by Mark Herbert, from Art Fetiche and will be on display in and around Victoria Square from 25 June to 10 July.

Lit from the within, the two-metre tall cubes will be one of the centrepieces of Tīrama Mai – the new Christchurch festival celebrating Matariki (the celebration of Māori new year).

Christchurch City Council Events and Arts Manager Tanya Cokojic says a conscious decision was made in the early stages of planning for Tīrama Mai to only use local artists and suppliers for the event.

“We could have brought in lighting installations from other parts of the country or even overseas, but we wanted to showcase the work of local artists and lighting designers and make the event unique to Ōtautahi Christchurch,’’ Ms Cokojic says.

“This is the first year we’ve held a lighting event specifically to coincide with Matariki and we want it to reflect our stories and our culture.’’

During Tīrama Mai zones within the city centre and New Brighton will be lit up every night from 6pm to 11pm with a series of innovative lighting installations and illuminated art works.

In the central city, the installations will be clustered around The Arts Centre, Worcester Boulevard, Victoria Square, the Ōtākaro Avon River Precinct and New Regent Street.

Information panels installed in City Mall, near the Bridge of Remembrance, will tell the story of Matariki.

See a map with the locations of the lighting displays.

“It’s going to be a great chance to explore the city after dark with your friends and family. You can check out all the lighting installations and also support the local hospitality industry by calling into one of the many restaurants or bars in the area,’’ Ms Cokojic says.

“On the opening night of Tīrama Mai – 25 June – we’re going to have live entertainment in Victoria Square from 5.30pm to 6pm. There will be kapa hapa followed by entertainment from performing arts company Cirko Kali.

“There will also be live entertainment at 7.30pm on other weekend nights during Tīrama Mai, either at the Bridge of Remembrance or Market Square in the Arts Centre.

“On the Friday and Saturday nights during Tīrama Mai we will also have a couple of food vendors in Victoria Square and Market Square selling hots drinks and snacks.’’

Tīrama Mai will end on Saturday 10 July with the Matariki Fireworks Spectacular in New Brighton.

The night’s festivities will start at 6pm with live entertainment and food trucks in New Brighton Mall. Then, at 7pm, the fireworks will begin. The fireworks display will be set to a soundtrack of classic Kiwi music.