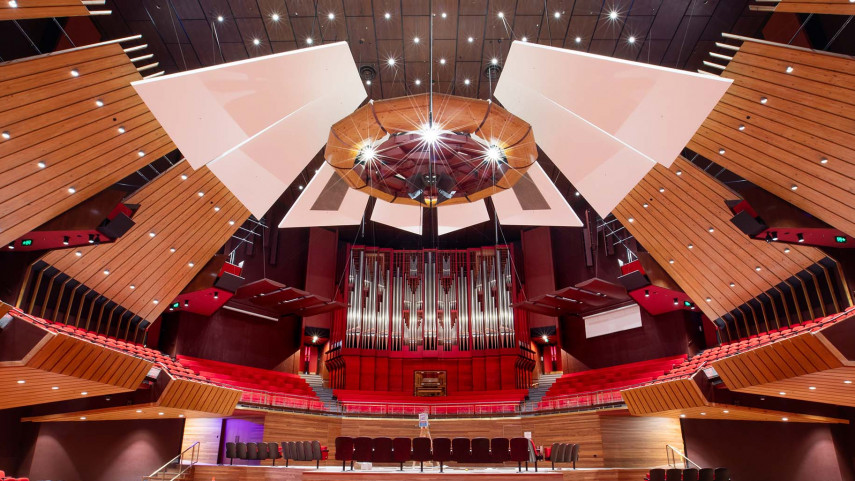 The doors to the restored Christchurch Town Hall will be thrown open to the public in the last weekend of February.

Christchurch City Council and Vbase - the events company that operates the Town Hall -are organising public open days on 23 and 24 February to give people an opportunity to reconnect with the iconic building that has played host to countless concerts, shows, graduations and civic events since it was built in the 1970s. The restored Douglas Lilburn Auditorium will be open for public inspection between midday and 6pm on 23 and 24 February.

The Christchurch Town Hall was badly damaged in the February 2011 earthquake.

However, a major restoration project has restored the building to its former glory and it is now ready to resume its place as the heart of the city’s cultural and civic scene.

“We want to give people a chance to reconnect with the Town Hall and to see the work that has gone into rebuilding it so we will be throwing the doors open to the public between noon and 6pm on 23 and 24 February,’’ says Christchurch Mayor Lianne Dalziel.

“It will be the first time the public have been allowed in the building since the earthquakes and I’m sure many people will enjoy having an opportunity to reacquaint themselves with its spaces.

“Most Christchurch people have fond memories of the Town Hall and of events they have gone to so it will be a chance for people to reminisce and to also get excited about future experiences they might have there,’’ the Mayor says.

The open weekend will begin at noon on Saturday, 23 February, with the Mayor officially cutting the ribbon to reopen the complex.

The public will then get a chance to go inside and check out the restored Douglas Lilburn Auditorium, the Avon Room (the former Boaters Restaurant), the Victoria and Limes Rooms.

The James Hay Theatre is still a work in progress but people will be able to get a sneak peek at the space.

“We’ll be releasing more details about the open days closer to the time but pop the dates into your diaries now because the reopening of the Christchurch Town Hall is a big milestone for the city and an occasion you won’t want to miss,’’ the Mayor says.

Vbase Board Chair Councillor Tim Scandrett says the Town Hall is looking amazing and people will be blown away by the work that has gone into restoring it.

“We cannot wait to welcome the public into the building,’’ Cr Scandrett says.