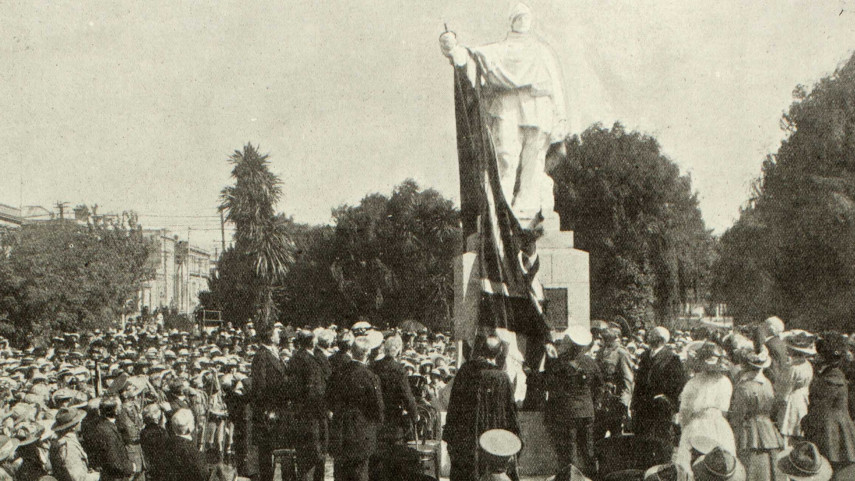 The treasured statue of Antarctic explorer Captain Robert Falcon Scott will be restored. This historic photo from The Weekly Press, from Canterbury Museum's Bishop Collection, captures the unveiling of the Scott statue in February 1917.

A restoration plan for the statue has been announced today on the eve of the 100th anniversary of the statue's unveiling.

The 2.5 tonne, 2.6 metres high statue was badly damaged in the February 22, 2011 earthquake when it toppled from its plinth. The statue snapped at its most vulnerable point - the ankles.

Last year Christchurch City Council established a project team consisting of specialists in their field who, over the past months, have identified and evaluated multiple repair options for the statue. One preferred innovative design has been identified which includes pinning the legs with carbon fibre rods and thread, and a form of base isolation between the statue and the plinth to give it added protection.

Over the coming months the project team will carve a mock-up of the repair of one leg of the statue with Carrara marble - the marble used to create the original statue - from Italy, ensuring the break surface is accurately replicated. This mock-up will then be seismically tested to help confirm the repair strategy or assist the team in making any adjustments required before starting repairs on the statue.

Due to the statue’s heritage listing in the Christchurch City Plan, a resource consent will be applied for. Provided Consent is granted and the seismic testing of the repair mock-up is successful, the project team expect to commence repairs on the statue in May 2017 and have the statue back on its plinth in time for the opening of the Antarctic Season in September 2017.

Mayor Lianne Dalziel says this news has been eagerly awaited by Antarcticans, not only in New Zealand but also overseas..

“The Scott Statue is an important monument nationally and internationally. Due to the fragile nature of marble and the angle of the break, risks are associated with any repair. At this stage, we’re confident of a good result with the innovative repair design. If all goes to plan we hope to reinstate the statue in time for the opening of the Antarctic Season 2017, which will be a fitting tribute in its centenary year,” Ms Dalziel  said.

Scott was a British Royal Navy officer and explorer who led two Antarctic expeditions, the Discovery Expedition, 1901–1904, and the ill-fated Terra Nova Expedition, 1910–1913. The statue serves as a memorial to those who died with Scott on his return journey from the South Pole in 1912. It was sculpted by Captain Scott’s widow Kathleen Scott and has become a symbol of Christchurch's important links to Antarctica and Antarctic exploration.

Unveiled in February 1917, the statue faces north towards the building that was at that time the Civic Offices. The inscription on the original plinth, which is taken from one of Scott’s last diary entries, read: “I do not regret this journey, which shows that Englishmen can endure hardships, help one another, and meet death with as great fortitude as ever in the past.”

Scott’s statue was one of three shaken from their plinths in the earthquakes. The Council reinstated the statue of John Robert Godley in Cathedral Square in February 2015 and returned William Rolleston to his plinth outside Canterbury Museum in December last year.