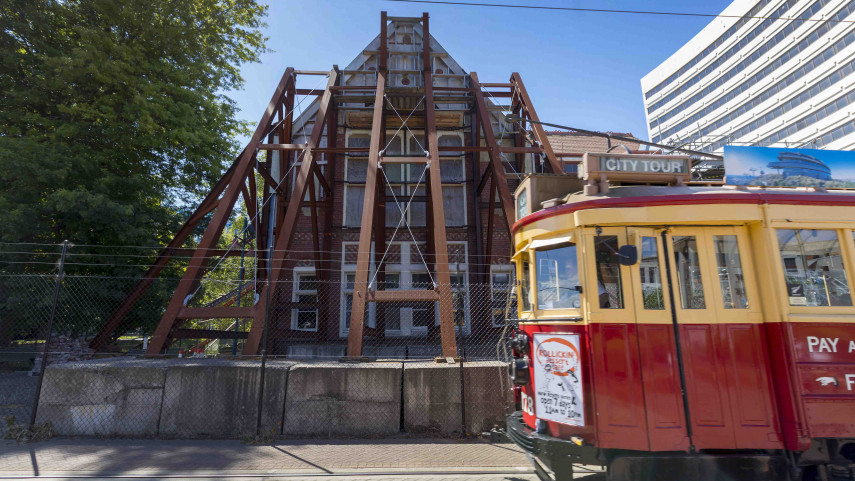 Restoration work is expected to start on the Old Municipal Chambers in January after Christchurch City Council today decided to grant a 50-year lease for the building to a new charitable trust ­– the City of Christchurch Trust – set up by private company Box 112.

Box 112 is known for restoring a number of the city’s other significant heritage buildings, including the Midland Building (the former Café Roma building, now Café Miro) and Public Trust Buildings on Oxford Terrace; the Peter Beaven-designed office block in Manchester Street (now the Muse Hotel) and The Welder development in Welles Street.

Under the lease agreement, Box 112 will undertake the strengthening and refurbishment of the building, on the corner of Worcester Boulevard and Oxford Terrace, at the direction of the trust. Up to $10 million of Council funding, already set aside in the 2018-28 Long Term Plan, will be used by the trust to undertake the restoration work.

The restoration work is expected to take about two years.

Mayor Lianne Dalziel says today’s decision is great news for the city. “The Old Municipal Chambers is one of the city’s most important remaining heritage buildings and a prominent landmark along the Ōtakaro Avon River Corridor.

“Box 112 has a proven track record of meticulously restoring heritage buildings and we’re pleased to partner with them to bring this treasured building back to life.”

Box 112 Director Sam Rofe says they responded to a Council Expression of Interest process to find a future use for the building because they were confident they could breathe life into it.

“We felt compelled to do something as we wanted to see it [the building] restored. Setting up the charitable trust is fitting as it’s a public building. We had been looking at the building because it’s in between the Midland Building and the Public Trust Building and we started looking at what we could do to help as we knew there was limited funding for its redevelopment. We came up with a plan to not only restore the building, but to ensure it’s activated in perpetuity,” Mr Rofe says.

“This is about a tremendous amount of trust and care being taken by the Council, and by us, to work on something together that will be beneficial to the people of Christchurch.”

Mr Rofe says they will be looking for tenant partners who reflect the building’s prominence and location. The lease allows the building to be used as an office, hospitality and education space and the second floor can also be used as residences.

“We would like to find something fitting…and we would prefer to have someone in there on a long term basis, maybe in the education sector. The accommodation on level two could provide an opportunity for live-in residencies.”

Mr Rofe says the first step the public will notice in the new year is scaffolding going up and the building being wrapped to protect it from deterioration, and to ensure work can be carried out in any weather.

The Old Municipal Chambers opened in 1887. It is listed as highly significant in the Christchurch District Plan and is a New Zealand Historic Places Trust Category One heritage building. It was the first Queen Anne-style building in the country and the first, and only remaining, permanent, purpose-built civic offices for Christchurch City Council.