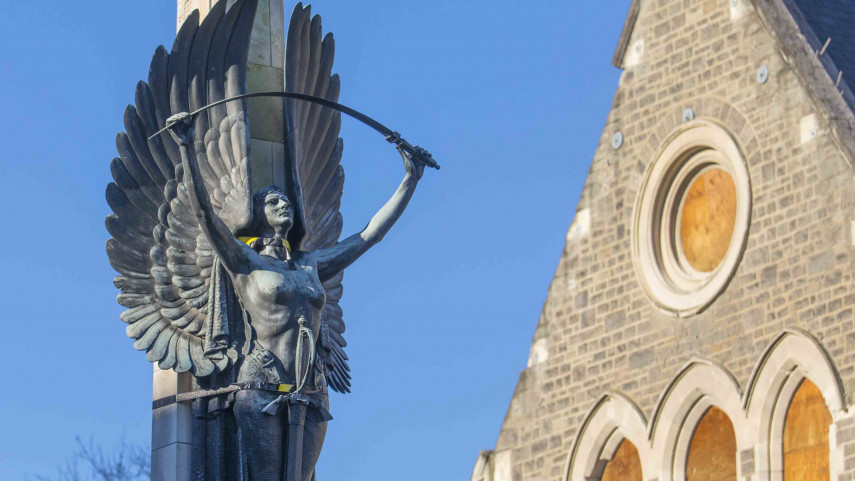 The restoration of the Citizens’ War Memorial will be completed in time for this year’s Armistice Day commemorations.

Christchurch City Council originally intended to have the earthquake-damaged memorial restored and back in Cathedral Square in time for Anzac Day 2022 but the complex project has encountered some unexpected delays.

“When you start restoring an historic monument you inevitably encounter a few surprises along the way and this restoration project is no exception,’’ says Brent Smith, Head of Vertical Capital Delivery at the Council.

“Once we removed the bronze statues and started deconstructing the stone, it quickly became clear that the steel reinforcing was heavily corroded. That meant we had to individually remove each stone rather than deconstructing the memorial in segments, as we had originally planned. ‘’

One hundred and forty-five pallets of stone were removed from the memorial and individually cleaned of mortar in preparation for reconstruction.

During the course of deconstruction, the memorial’s stone dimensions and concrete core dimensions were meticulously recorded to ensure that it could be reconstructed exactly as it was originally.

“We discovered during this process that some of the stone was in very poor condition so we have had to source additional stone from England and new travertine pavers from Italy for the reconstruction,’’ Mr Smith says.

“We are determined to have the restored memorial on its new site in Cathedral Square – near where the Police Kiosk used to be -  in time for this year’s Armistice Day commemorations,’’ Mr Smith says.

“From the outside, it will look exactly as it did when it was first erected as a memorial to the Canterbury men and women who lost their lives in World War 1, but the internal structure will be newer and stronger, which will ensure that it endures over time.

“Work has begun on laying the foundations for the memorial and the second concrete pour has already taken place. We will have construction of the base finished in time for Anzac Day,’’ Mr Smith says.

The Citizens’ War Memorial, also known as the Cenotaph, was originally sited on church land beside Christ Church Cathedral. It was the focal point for Christchurch’s Anzac Day dawn service up until the Canterbury earthquakes.

One of the seated bronze figures from the Cenotaph will be on show at Canterbury Museum as part of a special display telling the story of the memorial.