Robot boots up with library's help 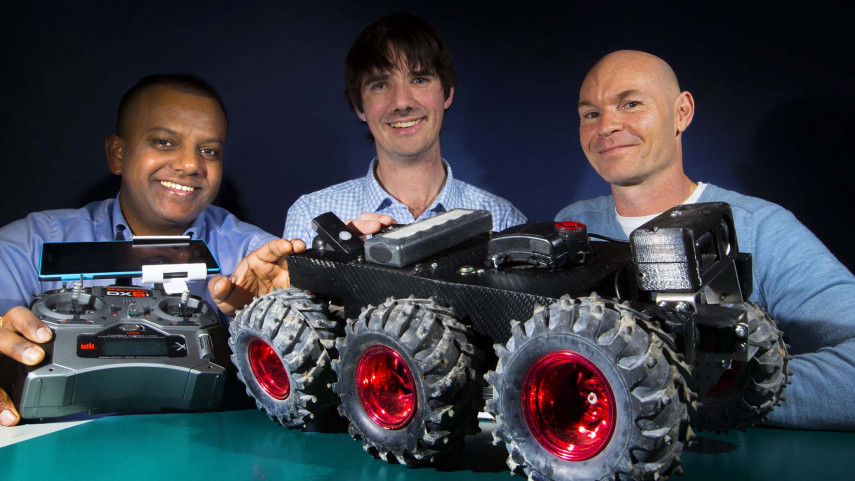 It might look like a toy monster truck but it’s really a hi-tech remote controlled robot worth thousands of dollars.

The creation of local entrepreneur Ravi Sanyal is used by home inspection companies to remotely check house foundations and it was developed with 3D printing expertise found at his local library at Te Hāpua: Halswell Centre.

Earlier this year Mr Sanyal’s company Techmatics Ltd was working on developing the specialised robot when they encountered frustrating problems with the supplier they were using for 3D printing. While researching other options, Mr Sanyal found to his surprise that the library, which has access to seven network 3D printers (five Makerbots and two Ultimakers), had the skills and resources he needed.

He was given help and advice from Danny McNeil, a Christchurch City Libraries Learning Specialist based at Te Hāpua: Halswell Centre, who helped him improve the design.

Mr Sanyal was impressed with the print quality and the support he was given.

“We needed to make a particular case for it and it had to be done on CAD but we were having problems with a local supplier,” Mr Sanyal says.

“Halswell library has been fantastic. They just really helped us out, we printed 10 prototype cases for the camera on their 3D printer.

“We kept re-designing and kept going back to Danny and his team, they were really good with advice on how to make the design a little bit better.”

Mr McNeil says many people are unaware how up to date Christchurch City Libraries are with new technology, particularly with their 3D printers, which are great prototyping units and use biodegradable plastic.

“We were happy to help out Ravi with his design and seeing how successful the end product has become is really satisfying. It also gave us an opportunity to assess the amount of time needed to support complex 3D printing enquiries and how this might impact on our service to other customers.”

Head of Libraries and Information Carolyn Robertson says this case demonstrates what the library service is capable of. "Having our library staff work on these kinds of projects means they are helping to support the economic contributions of local entrepreneurs, making Christchurch a better place for people, business and investment. " The Techmatics robot which can remotely inspect the foundations of houses.

Techmatics, which also develops websites and apps and recently received funding from Government agency Callaghan Innovation, has sold several different versions of the robot developed with the library’s help.

Mr Sanyal has plenty of other hi-tech ideas in the pipeline and plans to use Te Hāpua: Halswell Centre library again to 3D print future design prototypes.

“We want to innovate things that make life easier for people - if we can help the community we’re interested,” he says.