Ronnie gets back on the bike at age 72 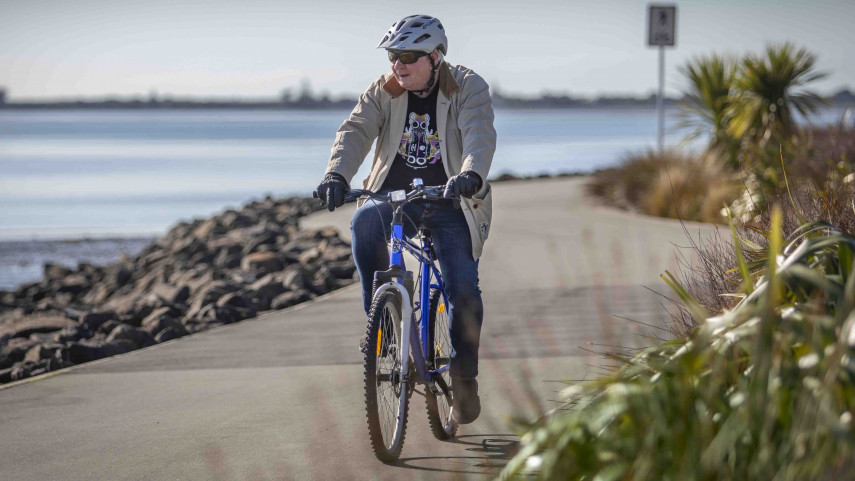 There are a few wobbles when Ronnie Kelly’s feet first hit the bike pedals, but they quickly pass.

As a youngster Mr Kelly was an assured rider, but it has been 10, maybe 15, years since the grandfather of three was on a bike and he is still regaining his confidence.

“The reason I wear gloves isn’t because of the cold – it’s to protect my hands from gravel rash if I fall off,’’ the 72-year-old confides as he pulls on his gloves and fastens his helmet in readiness for a ride along the Coastal Pathway.

“I’m a bit wobbly when I first get going, but I get better. I bought a bike that is just a little bit too big for me. I’m ok once I’m on it and travelling along at a reasonable speed, but going really slowly or getting the bike started is still a little bit of a problem.’’

Mr Kelly, who originally hails from Scotland, is a diabetic and it is largely for health reasons that he has bought a bike and started going for short bike rides. He is determined to lose some weight and improve his fitness.

He is starting off small, going for short, gentle rides that allow him to build-up his cycling skills. But he plans to do more as the weather improves and his confidence grows.

A liking for things with two wheels

“I’ve always enjoyed biking, but I got out of the habit of it,’’ Mr Kelly says. “I like the pace of it and being able to look around. It’s quite a leisurely thing. I’m not out to go really quickly or anything like that. I just like the feeling of it. I did have a motorbike for a while so I guess I have a liking for things with two wheels on them.’’

Mr Kelly has taken a few rides along the Coastal Pathway and has also been on some of the city’s other off-road cycleways. He feels safe on them as he doesn’t have to contend with other traffic and can take his time.

“Before there were cycle paths everywhere, I would have thought twice about buying another bike. But there are just so many opportunities for cycling now,’’ Mr Kelly says.

While he has only been biking for about a month, Mr Kelly believes it is already starting to make a difference to how he feels. He has lost some weight and his blood sugar levels have been improving.

Biking also help assuage some of the guilt that Mr Kelly feels when he takes his treasured Mustang GT out for a drive.

“It doesn’t balance it out, but I do feel little bit less guilty about taking the Mustang out for a drive now that I’m doing some cycling,’’ he says.

Maybe, one day, he might even love his bike more than he loves his Mustang?

“Not a chance,’’ he says with a chuckle.

The benefits of cycling

That is why it is going to spend $242.8 million over the next 10 years on making the transport network safer for people who want to cycle.

“We want to make going places by bike a safe, convenient option for people of all ages,’’ says Lynette Ellis, the Council’s Acting Head of Transport.

Results from the Council’s Life in Christchurch 2020 survey show that 27 per cent of respondents aged between 65 and 79 are now travelling by bike at least once a month – up from 5 per cent in 2019.

Fifty-one per cent of the survey respondents aged over 65 say they find it easy or very easy to travel by bike in Christchurch.

“The network of major cycleways that we are building is changing how people move around the city. I particularly love it when I see young kids, or people who haven’t been on a bike for years, riding on the cycleways because it shows the investment is making a difference,’’ Ms Ellis says.

““Many older people will recall biking everywhere as children and young adults. It was the way people got around. That has changed though as cars have become cheaper to own and run.

“We want to see the pendulum start to swing back the other way so that biking again becomes a popular way for people to get around. People don’t need to make every journey by bike – just one or two a week could make a huge difference,’’ Ms Ellis says.