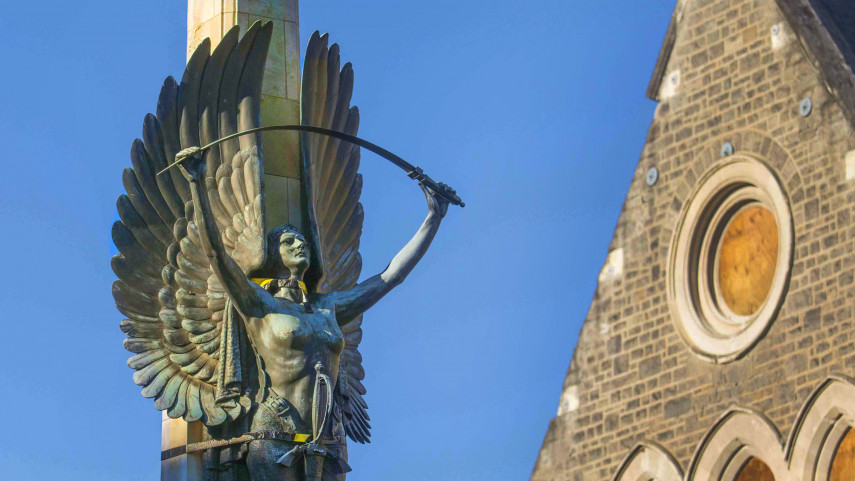 The Christchurch Memorial Returned and Services Association (RSA) intends to apply for resource consent so it can move the Citizens’ War Memorial to Cranmer Square.

RSA President Pete Dawson says they do not believe the current location of the Memorial in Cathedral Square is appropriate.

“Relocation will allow safe, unimpeded public access to the memorial while the Christ Church Cathedral is reinstated. Since the 2011 February earthquake, the Memorial has been inaccessible for people to pay their respects, apart from limited access on Anzac Day,’’ Mr Dawson says.

The RSA will apply for resource consent later this year for the relocation and will request that it be publicly notified, so the Christchurch community can have a say on the proposed relocation.

“We understand some people might be opposed to the relocation and we will contact them to explain our views. We will also hold community drop-in sessions at the RSA for people to learn more about why Cranmer Square is the most appropriate setting for the Memorial,’’ Mr Dawson says.

The RSA has already secured some of the funding needed to meet the costs of the resource consent process, strengthening and repairing the Memorial, and shifting it to Cranmer Square, which is estimated at up to $1.2 million.

The Citizens’ War Memorial is owned by Church Property Trustees (CPT), on behalf of the Anglican Diocese of Christchurch.  Bishop Peter Carrell says CPT supports the RSA’s consent application and wants to gift the memorial to the the citizens of Christchurch following its relocation.

“What many people might not know is that in 1934, when the Cathedral Chapter and Church Property Trustees agreed a war memorial could be placed on the grass plot on the north side of the Christ Church Cathedral, it was on the condition ‘that if at any time in the future the land be required for Cathedral purposes the memorial shall be removed without expense to the Chapter or Cathedral funds.

“Relocation is consistent with the original agreement between the Christchurch War Memorial Association Inc, the Church Property Trustees and the Cathedral Chapter and will ensure the safety of the Citizens’ War Memorial.

“The relocation will also allow repair and strengthening work to be carried out on the memorial.  There is some damage due to the earthquakes and significantly corroded steel beneath the memorial’s surface,” says Bishop Carrell.

Mayor Lianne Dalziel says a number of issues will need to be taken into account in the resource consent process, including the history that saw the Cenotaph developed as a Citizens’ War Memorial, as opposed to a Civic War Memorial, and the significance of the place it holds in Cathedral Square, which was the desire of George Gould, who led the campaign for the memorial.

“On the other hand, it has been a shame that such a significant part of our heritage has been locked away from public view for so long and that there are still years that lie ahead when the Memorial will have to be further protected.  These are the issues that the citizens of Christchurch must weigh up when the application is notified.

“At the same time as this process is initiated, the Council will need to resolve to hold a formal consultation on the proposed location, as Cranmer Square is a Reserve subject to the Reserves Act 1977 and is a listed heritage item in its own right in the District Plan.  We will expect staff to provide options as to how to link these consultations so it is clear what all the issues are,”  Mayor Dalziel says.

Heritage New Zealand says it supports the proposed relocation as it will facilitate the reinstatement of the Cathedral and enable appropriate long term public access to the war memorial.

“Once relocated to Cranmer Square the memorial will still have heritage values and the historic list entry will be amended to reflect the values of its new location,'' Heritage New Zealand Pouhere Taonga Southern Region Director Sheila Watson.