Saltmarsh restoration under way along Ōpāwaho/Heathcote 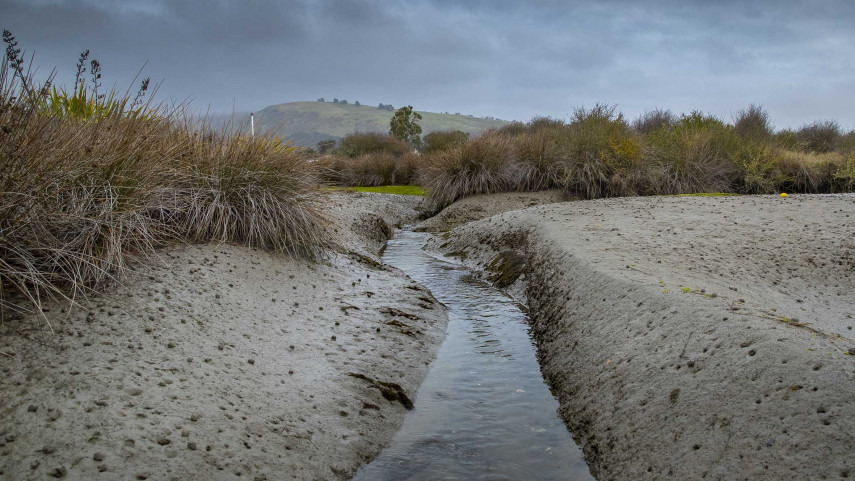 A new project alongside the Ōpāwaho/Heathcote River - immediately downstream of the Tunnel Road Bridge - aims to restore the site’s saltmarsh and coastal bush habitat.

The area was partially filled decades ago during construction of the motorway and more recently by earthquake liquefaction. A series of arson attacks have since burnt more than half a hectare of the site.

Christchurch City Council’s Parks Biodiversity and Regional Parks teams initiated the restoration project and gained funding from Environment Canterbury for excavation of burnt grass and weeds. This has enabled shallow tidal flooding to be restored to the site, bringing in the seeds of native marsh plants, crabs, estuarine snails and the like.

Native birdlife expected to benefit from this habitat restoration project include wading birds like pied stilts and white-faced herons, as well as swamp birds like the marsh crake and the nationally critically endangered Australasian bittern.

Council ecologist Andrew Crossland says the initiative will restore the natural habitat of the area.

“This work will enable the inflow of tidal water to regenerate vegetation, allowing self-colonisation of saltmarsh plants over the area of burnt ground.”

A team of local residents and volunteers is supporting the work of the Council rangers.  An initial planting day in April saw them plant around 180 native shrubs and grasses in the area and another 800-plus have been put in over winter.

“More than 2000 saltmarsh and coastal bush plants are planned for the site to create a landward planting zone over the coming year,” says Mr Crossland.

The Ōpāwaho/Heathcote River passes through Hoon Hay, Cashmere and Opawa before draining into the Avon/Heathcote estuary at Ferrymead.

With large scale die back and loss of salt-marshes around both the estuary and Brooklands Lagoon, a sizeable portion of Christchurch’s pre-European native vegetation is in the process of being rapidly lost, Crossland says.

“Habitat restoration projects like this in locations where the tide can reach is the only way we can preserve and protect our estuaries and the internationally significant bird populations they support”.