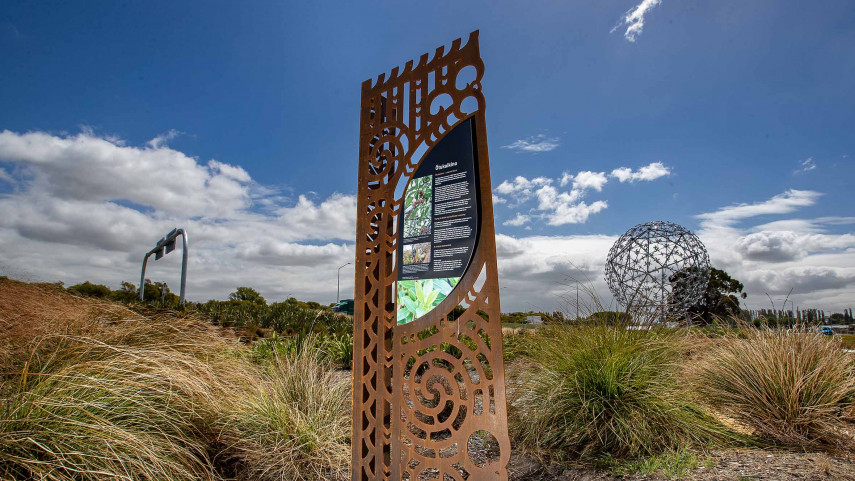 People using the shared path that runs alongside the new Christchurch Northern Corridor (CNC) can now learn more about the area’s history and the surrounding environment.

The CNC Alliance and Te Ngāi Tūāhuriri Rūnanga have installed storyboards that tell the rich history of the area at 11 culturally significant sites along the path.

Cyclists and pedestrians are being encouraged to stop at each of the sites and take time to learn about each place’s significance.

“This ara (old trail) was a primary route for our Ngāi Tūāhuriri whānau travelling from Kaiapoi Pā to their seasonal mahinga kai (food gathering) and Kāinga nohoanga (places of permanent residence) in and around what is now Christchurch,” says Ngai Tahu Whakapapa Unit Manager Arapata Reuben, who was among those involved in putting the project together.

“The land south of the Waimakariri River was an important area for food gathering and preparation. Many sites along the new shared path hold great significance for ngā uri of Kati Urihia, a sub-hapū of Ngāi Tūāhuriri,’’ he says.

The steel artworks and information panels were designed by artist Morgan Mathews-Hale, from Kaitiaki Studios.

“The design reflects the Taurapa (canoe stern post) of a great waka (canoe) and traditionally represent elaborate narratives such as that of Tāwhaki and his ascent to the heavens. For us it tells the stories and whakapapa of the motorway and also, indicates a journey, travel and direction of our ancestors and future generations. Corten Steel was chosen because of its likeness to the red ochre colour of our traditional carved waka.’’

Waka Kotahi NZ Transport Agency Regional Relationships Director Jim Harland says it is gratifying to acknowledge the historical significance of the route for mana whenua, alongside its environmental importance, and to share that with the wider community.

The new off-road path, rather than being a straight ribbon of asphalt parallel to the new motorway, meanders through the natural landscape currently being established alongside the motorway. Many native trees and plants have already been put into the ground over the past three years, softening the motorway edges. The new planting will be an important food source for the return of native birds into the city’s fringes.

“This new cycling path has already inspired many people to take up biking, e-biking and an active commute to work. From day one we have seen an average of 350 cyclists a day using this shared path and the numbers are growing rapidly.”