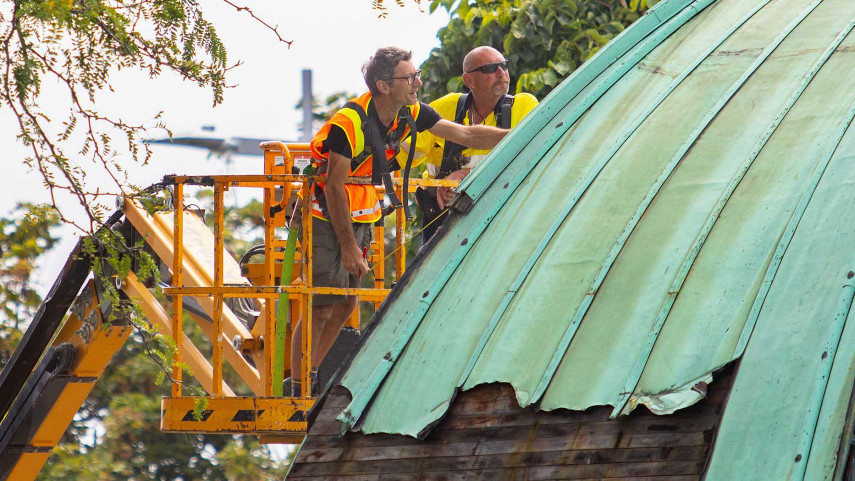 Work will begin later this year to rebuild the historic band rotunda as the centrepiece of a landscaped riverside precinct.

The classical-style building on Cambridge Terrace will be completely restored in a Christchurch City Council project that’s planned to start in September and will take at least 12 months.

When complete, the rotunda – with its distinctive copper dome back in place - will take centre stage in the Thomas Edmonds River Precinct, part of the newly opened City Promenade.

The precinct, which is near the Margaret Mahy Family Playground, will feature several other heritage riverside landmarks that were, like the rotunda, gifted to the city by local businessman and philanthropist Thomas Edmonds in 1929 to celebrate his jubilee year. Workers measure the dome of the Thomas Edmonds Band Rotunda ahead of its restoration.

They include the Pavilion next to the rotunda, the Edmonds Clock Tower (cnr Madras and Oxford Tce), Telephone Cabinet (booth) and River Wall, which have already been restored.

“We hope to retain public access to the Thomas Edmonds River Precinct while the building work is being carried out, so people can continue to enjoy these historic features,” says Council Heritage Programme Manager Richie Moyle.

“When the whole project is finished, with the iconic rotunda back in place and serving its original purpose, this area is going to be fantastic for visitors and residents,” Mr Moyle says.

“It will combine heritage and scenery and will be a beautiful place for people to enjoy entertainment alongside the Avon River.”

The restoration includes reinstalling the rotunda’s original copper-sheathed dome which weighs 70 tonnes and has been preserved on the site since the building was damaged in the 2011 earthquakes and deconstructed for safety reasons.

The site is now fenced and signs have been put up to explain the history of the building to members of the public.

The rotunda will be restored to function as a venue for musical performances and other appropriate commercial or community activities.

It’s envisaged that the restored building will feature retractable window coverings to make it usable in cold or wet weather. It will not have glass windows as they were not part of the original design.

Thomas Edmonds - who founded the Edmonds Factory and Gardens on Ferry Rd -  donated money towards a number of structures designed to beautify the Avon River area in 1929 as part of his jubilee celebrations.

Outdoor brass bands were a popular form of entertainment in Christchurch and Mr Edmonds was a loyal supporter of the Woolston Brass Band so a band rotunda was seen as a key addition to the city.

Who was Thomas Edmonds? They owned a grocery store in Woolston where they developed the now famous product, Edmonds Baking Powder.

In 1929 the prominent businessman and philanthropist donated money towards a River Bank Improvement Scheme to mark his jubilee year after 50 years of doing business in Christchurch.

The scheme included a band rotunda built in the "high renaissance style", shelter, balustrade walling, seating and lighting on the Cambridge Tce riverbank and a clock tower, telephone cabinet/drinking fountain on Madras St.