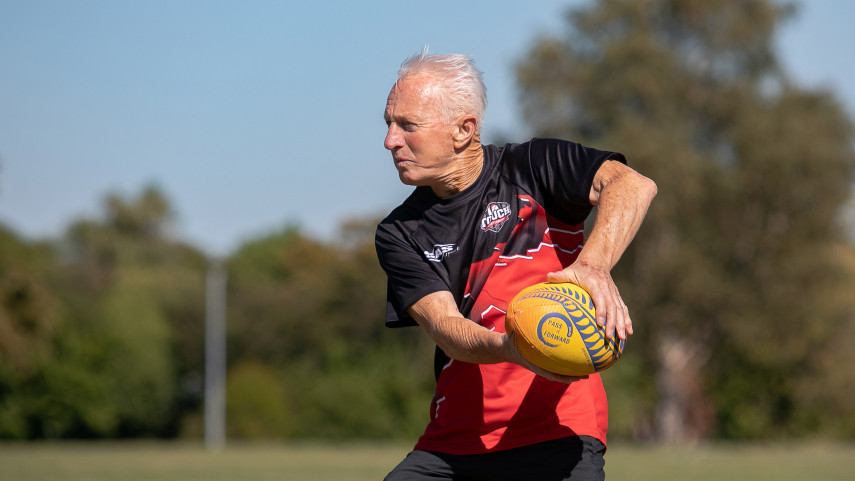 Players may be busy keeping in touch with Barry Clausen when the 74-year-old takes to the field at the Bunnings National Touch Championship in Christchurch this month.

Mr Clausen aims to run onto the turf as part of the over-55s Canterbury men’s side when Ngā Puna Wai hosts the National Championship for the first time from Thursday, 15 April to Sunday, 18 April. However, a few “niggles” may slow his plans.

While he will be the oldest player at the tournament, he believes it is “important to just do your best in the position you have been selected for”.

“I don’t have a problem or think about the age gap when playing against younger players,” Mr Clausen says.

“I think the secret to my success and fitness is setting goals and staying motivated,” he explains.

“It’s also exciting to be playing in my hometown for the Nationals, and Ngā Puna Wai is a great venue. Christchurch has always had a certain friendly, welcoming vibe.”

Mr Clausen, who still works 30 hours a week as a cleaner, played his first touch game 23 years ago, looking for a social game even though he did not know much about the sport.

“I played rugby from a young age and through the grades, along with athletics, cross-country and road racing, judo, masters rugby and masters rugby league,” he says. “And I am still playing league.”

With more than 70 teams in action over the four days, the national tournament will draw thousands of competitors – including past and present Touch Blacks – and supporters from across the country.

Council Recreation and Sports Services Manager David Bailey says that the event “puts Christchurch in the box seat to showcase Ngā Puna Wai and the city’s attractions to a national audience”.

“It promises to be an exciting four days as our top touch players descend on the city,” he says.

“It’s also a great opportunity to promote the city – and all that it offers – to our visitors.”

Ground entry is free, with 13 fields in play, along with on-site food vendors and bouncy castles and face painting to entertain the younger spectators.

Teams from the Masters grades will be centre stage from Thursday until Saturday, while the Open and Under-21 sides will vie for honours from Friday until Sunday.