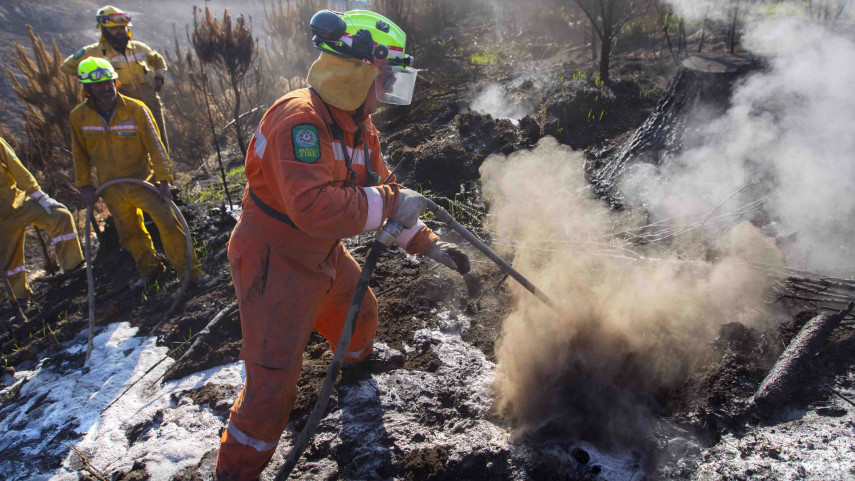 The Cass Bay fire in Lyttelton Harbour has been put out. Rural fire crews have spent the evening working to mop up remaining hotpots.

The site will be inspected early in the morning.

Firefighters have also stopped the West Melton fire spreading, with about 2-3 hectares burned, mainly through hedges and shelter belts. Helicopters will continue to operate until dark. There will be about 15 people on site overnight patrolling and putting out hotspots.

It is understood people who were evacuated are still not allowed back home.

No homes or other structures were damaged by either fire.

For ongoing information about the West Melton fire please check either the Selwyn District Council website or the FENZ Facebook page.

The large hedge fire at Weedons Ross Road is not contained and is spreading. Five fire appliances, six tankers, one command unit and two helicopters are in attendance.

Police and FENZ are evacuating residents on Jacks Drive. A welfare centre has been set up at West Melton Community Centre for evacuees.

The two helicopters used to battle the blaze at Cass Bay have been stood down because the fire is now contained. Crews are continuing to work on the ground to put out hot spots.

The fire started at 1.44pm this afternoon and burned about 7-10 hectares of mostly scrub and gorse. No houses or structures were damaged.

Rural ground crews are preparing to take over from the urban firefighters to continue mopping up.

Conditions are expected to remain at a high risk for fire with hot temperatures and strong winds into the evening.

Bealey Ave now has one westbound lane open and all eastbound lanes open. There may be some delays until the traffic clears.

FENZ is reporting the Cass Bay fire is now contained. Ground crews remain on the scene.

Urgent work needs to be done to remove trees that have been damaged by the wind on Bealey Ave between Montreal St and Stoneyhurst St.

This means Bealey Avenue is open to only one lane eastbound.

Motorists are advised to expect delays and avoid the area if possible.

FENZ is responding multiple fires around the region. Here is their update on what's happening.

They are asking people to stay away from these areas.

Members of the public are asked to avoid Governors Bay Road, near Cass Bay, as Fire and Emergency (FENZ) respond to the wildfire.

The fire is burning near gorse at the top of the hill. The very hot and windy conditions, combined with access difficulties, are proving a challenge. Five appliances are in attendance with a helicopter on standby. There are currently no structures at risk.

FENZ is also dealing with a number of smaller fires in Selwyn and north of Christchurch.

People are urged to remain vigilant and be extremely careful. Avoid any activities that may accidentally cause a fire, including operating machinery, carelessly

A fire is burning on the Port Hills above Cass Bay.  Fire and Emergency New Zealand are on the scene.

They are also fighting several other fires around the Canterbury region.

We will bring you more information as it comes to hand.

Electricity company Orion says its network is being affected by high winds that have caused trees and branches to fall through power lines, cutting power in a number of areas.

There are currently more than 2800 customers without power in Lincoln, West Melton, Tai Tapu, Akaroa and in Lyttelton.

Orion crews are working as quickly and safely as they can to restore power and ensure public safety.

Orion is urging anyone in Christchurch, Banks Peninsula and central Canterbury who sees a fallen power line to stay well clear and call 0800 363 9898 immediately.

They are advising customers to visit www.oriongroup.co.nz or call 03 363 9898 for more information.

A fallen copper beech tree has prompted the closure of Riccarton Bush.

Fifield Terrace in St Martins is also currently closed to traffic between York Street and Waltham Road because of a fallen tree.