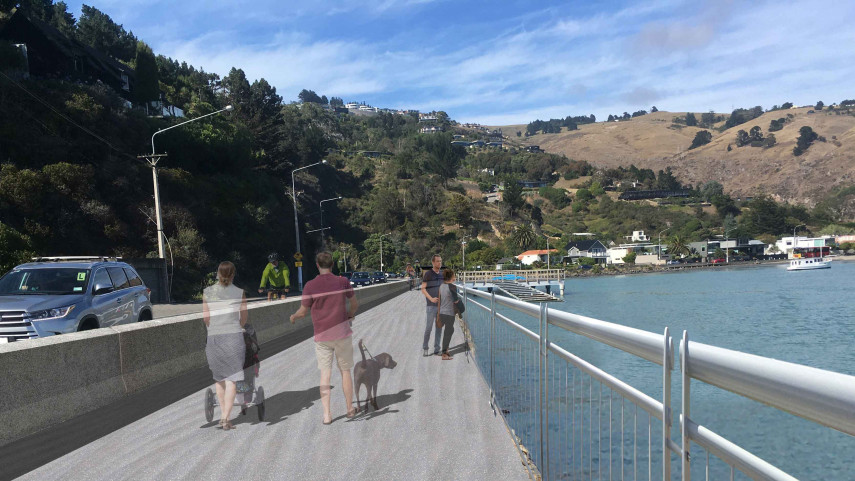 With work on the Te Ara Ihutai Christchurch Coastal Pathway reaching a tricky stage, the Sumner/Redcliffs community is being asked to weigh in on how they would like the work carried out.

Construction of the Coastal Pathway has entered its final phase, with contractors Fulton Hogan busy completing the section between the eastern end of Redcliffs Village and Shag Rock, Sumner.

Once complete, the pathway will stretch 6.5 kilometres from the Ferrymead Bridge to Scarborough Beach in Sumner, and allow people to enjoy walking, cycling, scooting or skating safely off-road along the coast.

“Work is going smoothly, but Fulton Hogan have reached a 110 metre stretch that’s too narrow to maintain both the worksite and two lanes of traffic,” says Lynette Ellis, Christchurch City Council’s Head of Transport and Waste Management.

“Fulton Hogan has developed two different approaches to how they can complete this section, and they want to find out which option the community would prefer. They particularly want the feedback of those who live in, or commute through, the Sumner/Redcliffs area, as they will be the most affected.”

Option One would see work completed at night between 8pm–6am, Sunday to Thursday. This would mean two lanes of traffic can be maintained during the day. The work would be able to be completed in six weeks but there could be noise at night for nearby residents.

Option Two would see the work done in two shifts each weekday. The first shift would operate from 9.30am to 2.30pm and the second shift would work from 6pm to 11pm. Traffic would be reduced to one lane during each shift. However, outside of shift hours, the road would be reinstated to two lanes for peak traffic.

This option would mean quieter nights for residents but delays of up to 15 minutes for road users when the road was operating with one lane only. The work is also likely to take twice as long to complete – 12 weeks as opposed to six weeks under Option One.

The two options are explained more in this video.

“Each option has its pros and cons, and the people who will be living with it will be able to indicate which one they'd prefer,” Ms Ellis says.

“We recognise this work is having an impact on a wide group of people, and we apologise for any inconvenience.”

Residents can share their views by completing a simple survey. Complete the survey here by 1pm on Thursday 28 April.

Fulton Hogan hopes to have a plan in place and work under way by mid May 2022.

Residents who want more information can contact the Fulton Hogan team via 0800 ROADFH or cant.info@fultonhogan.com, or arrange an in-person meeting.