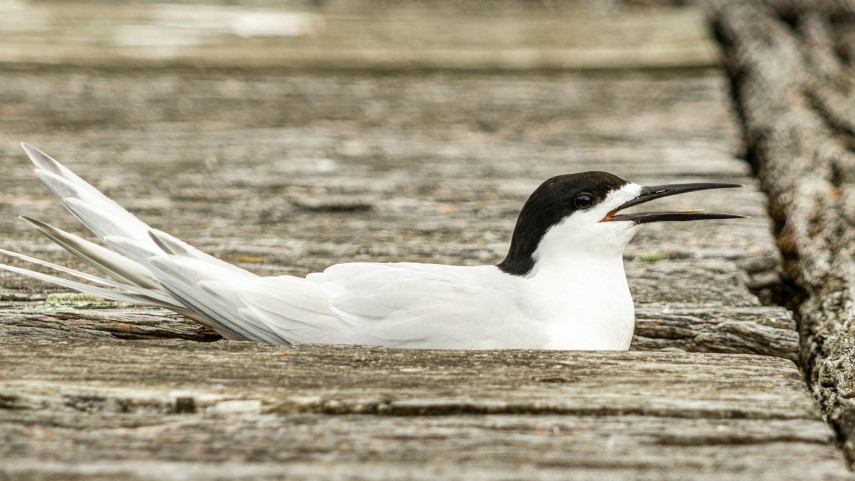 Akaroa and its visitors are being called on to help protect a pair of at risk native birds and their newly hatched chick called Christmas.

The pair of white-fronted terns/tara have a well-hidden nest, tucked between the wharf bearers and seemingly happy to co-exist with humans.

It’s the second year in a row a pair of terns have taken up residence on the wharf however last year’s chick was killed by a passing dog.

“The best chance of them succeeding in raising their young is protection from predators,” says Christchurch City Council Park Ranger Alison Evans.

“For this family, the main threat is dogs and cats so we are asking everyone to voluntarily avoid taking a dog onto the wharf. If they must, it needs to be on a lead. Likewise, cats could plunder the nest – so, please keep them indoors at night.”

The site has been made secure by the Council and Department of Conservation together with Fulton Hogan, who installed large fences around the nest. The birds are fully protected under the Wildlife Act 1953 and are considered threatened.

But Ms Evans says the rangers’ approach is to educate and the Council has installed signage near the nest that provides information about tara.

“We are lucky to see many of these birds around Akaroa Harbour and we are hoping to see this chick fledge successfully to add to the local population.”

The parents are sharing the care, with one keeping the chick protected while the other travels to feed.

“The big risk is that the birds will be disturbed and lift off the nest, exposing the chick,” says Ms Evans, adding that even 10 minutes can be enough time for the heat or cold to kill the young bird.

The parents need to continue protecting their fledgling for another 35 days, before they can fly away in early February.

As immature birds, the terns’ adventures will continue, flying 2,000 km to overwinter in Australian waters before returning to New Zealand to breed.