Thousands of historic treasures found under The Court Theatre site 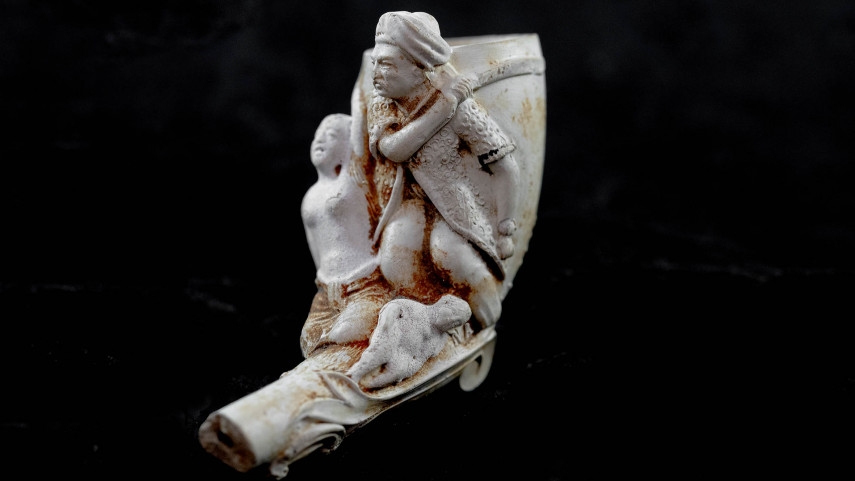 A clay smoking pipe made in France depicting a scene from an 1857 rebellion in India is just one of the thousands of historic treasures found under the site of the new Court Theatre.

Archaeology firm Underground Overground has been working with Christchurch City Council contractors to excavate the area which will be home to The Court Theatre in the Performing Arts Precinct.

Intact gin and soda bottles, marbles, glass beads, a bone toothbrush, currency that could only be used in Christchurch, a pit of old leather shoes, brick lined wells, building remains, latrines, infilled gullies, drains, and cesspits have all been discovered under the ground on the corner of Colombo and Gloucester Streets.

“The majority of archaeological features identified, and artefacts recovered appear to date to the 1850s and 1860s, which is relatively early for Christchurch European archaeological sites. Most other in the city tend to date a little later than this,” Underground Overground Archaeology artefact specialist Clara Watson said.

“The site is also interesting in that it is commercial rather than domestic in use, which again is less common in Christchurch. There’s a lot we can look at and learn about how people lived.”

170 years ago, this section of Colombo Street was largely a boutique shopping area with a few residential homes.

“The items are now being washed and analysed, we still have a lot of work to do before we can fill in how these items got there,” she said.

For example, the clay smoking pipe, which depicts a man attacking a woman while her child lays dead at her feet, was manufactured by the French pipe manufacturing firm L. Fiolet and depicts a European view of the 1857 Indian Mutiny.

The archaeologists are now working on putting together the puzzle on how this French made pipe, which was inspired by events in India, came to end up in Christchurch.

“There is no evidence that the pipe has been smoked, and one possibility is that due to the very graphic and confronting design of the pipe nobody wanted to purchase it and the store owner actually dumped it as part of unsold stock” Miss Watson said.

Questions such as these will be part of the ongoing analysis of the material from the site.

The site was particularly unique due to the sheer number of items that were found, but also how well they had been preserved under the ground.

About 55 boxes filled with thousands of artefacts have been taken from the site.

Council Acting Head of Vertical Capital Delivery Brent Smith said it has been interesting to see what the archaeologists have found from the site.

“The archaeology team worked closely with contractors on site to allow for the appropriate archaeological investigations, while not holding up the works programme,” he said.

Construction of The Court Theatre is expected to begin in July.

The new three-storey building will include a 375-seat auditorium, a 120-seat family theatre which will also be the stage for late night Scared Scriptless, and an education studio along with front of house bars, restaurant and box office.