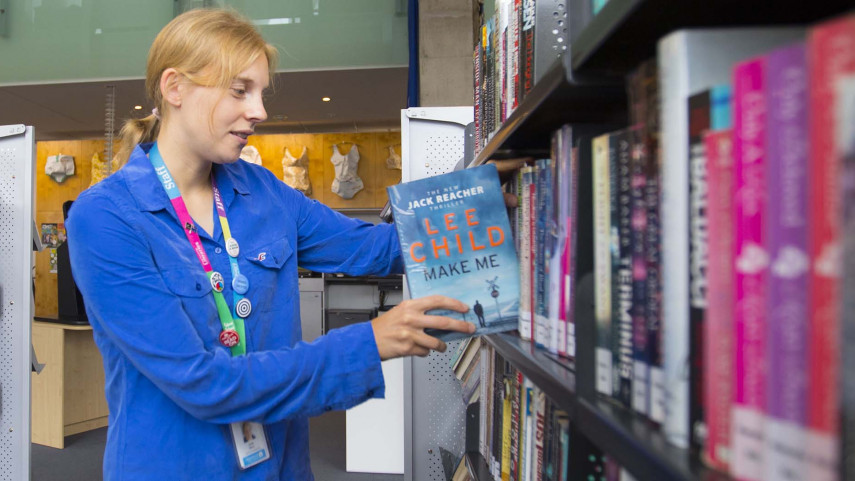 Three Child novels feature in the top five fiction “checkout” list, which also includes Paula Hawkins’ The Girl on the Train and No Man’s Land by David Baldacci. New Brighton librarian Emily Oliver puts one of Lee Child's most popular books back on the shelf.

“Readers love a good thriller, enjoying the intricacies of a developing plot and all the twists and turns,” Christchurch City Libraries Content Manager Anne Anderson says.

“These ‘most read’ lists provide our staff with greater insights into the interests of library users, so we can best meet their reading needs.”

For the younger readers, Suzanne Collins still rules the library shelves with three books – The Hunger Games (No. 1), Catching Fire (No.3) and Mockingjay (No.5) – in the top five young adult section.

“The dystopian novels of Suzanne Collins are much loved by our younger readers as the teen characters tackle massive challenges in pursuit of a better world,” Ms Anderson says.

Miss Peregrine’s Home for Peculiar Children by Ransom Riggs and Jay Asher’s Thirteen Reasons Why have also been repeatedly requested.

Among the youngest book lovers, The Adventures of Tintin by Hergé continues to be a page turner, taking out the top “checkout” spot, followed by Harry Potter and the Cursed Child, Andy Griffiths’ The 65-Storey Treehouse, David Walliams’ Awful Auntie and The Enormous Crocodile by Roald Dahl.

The Girl on the Train – Paula Hawkins

Dead To Me – Lesley Pearse

After You – Jojo Moyes

The Wrong Side of Goodbye – Michael Connelly

Paris for One and Other Stories – Jojo Moyes

The Adventures of Tintin – Hergé

Asterix and the Golden Sickle – Goscinny and Uderzo