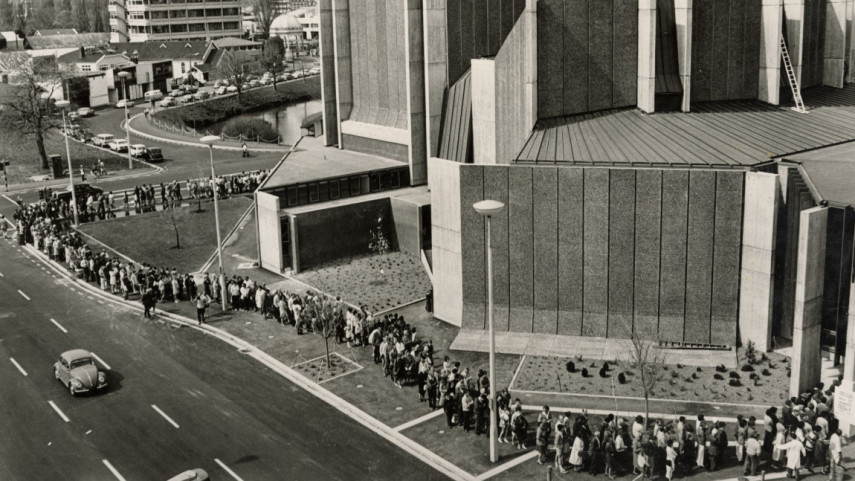 September 1972 was an historic month marked by the opening of the Christchurch Town Hall - a momentous event for the city and its people.

A line of eager townsfolk snaked from the main entrance on Kilmore Street around the corner towards Victoria Square as people clamoured to see inside the Sir Miles Warren-designed brutalist facade.

The stark, modernist building sat proudly on the banks of the Avon River overlooking Victoria Square. It was the city’s first town hall in over 100 years and with its world-leading acoustic design people felt justly proud of what had been achieved.

“The buildings in Victoria Square have already won the admiration of those whose technical and artistic judgment can be respected; and when Christchurch citizens see the finished buildings few should be disappointed,” said an article in The Press three months out from the opening.

The striking  Warren and Mahoney design had been chosen from among dozens of other in a 1966 competition.

It comprised a main auditorium seating an audience of 2,354, an orchestra of 120 and a choir of 400; the James Hay theatre seating 1,006 and the foyer, restaurant and function rooms.

Costing the princely sum of $4 million (including interior fittings and furnishings), the Town Hall was a truly regional undertaking with all six former metropolitan territorial local authorities contributing.

The Town Hall Committee, set up in 1957, was instrumental in creating the momentum to get the project off the ground and raising substantial funds.

The fundraising initiatives included a voluntary subscription run by Town Hall Promotions Inc. in 1969, with a loan issue of $500,000 offering returns of 5.5% per annum for six years.

Committee chairman Sir James Hay presented a cheque for $75,000 at the laying of the foundation stone in 1969 and another cheque three years later for $400,000.

At the official opening on September 30,  trumpet fanfares rang out before ‘God Save the Queen’ was sung and the Skellerup-Woolston Brass Band played a specially commissioned piece by composer Vernon Griffiths as fifty sopranos sang in accompaniment.

The Town Hall went on to host many events, shows and concerts, becoming an important social and cultural hub. It was often referred to as the city’s ‘living room’.

The installation of a pipe organ in the auditorium in May 1997 completed the picture of a model Town Hall.

After suffering extensive damage during the 2011 Canterbury earthquakes, the Town Hall remained closed and its future looked uncertain until in 2015 the Christchurch City Council confirmed an earlier decision to fully repair and restore the building at a cost of $127.5million.

In July 2017 approval was given for the works to be extended to include a new three-story building as a rehearsal and office space for the Christchurch Symphony Orchestra.

On the weekend of 23 and 24 February, 2019 the fences came down and the public queued once again to see inside the magnificently restored building - just as they had back in 1972.

The city’s ‘living room’ was back.

We’re celebrating 50 years of the Christchurch Town Hall this month with stories and images from the past.