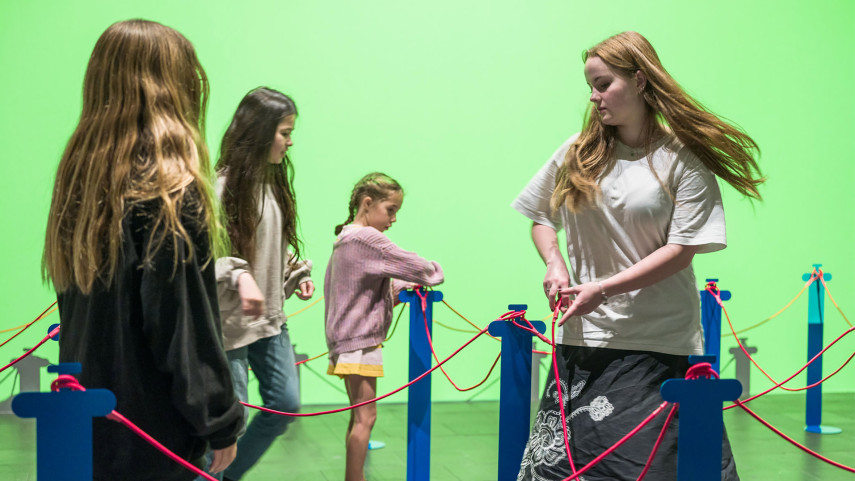 Just in time for the summer holidays, Te Puna o Waiwhetū Christchurch Art Gallery has a new interactive exhibition and lots of activities to keep the kids (and adults) entertained.

“If you haven’t been to the Gallery in a while, now’s a great time to pay a visit. There are lots of great opportunities to explore, play and create with your whānau,” says Gallery Director Blair Jackson.

“Alongside our two new family focused experiences, we have a range of new exhibitions showcasing works from New Zealand artists, across different mediums.”

“Visitors will get a rare opportunity to become part of the Gallery space, changing it as they move through. You can simply go with the flow and follow the open route in front of you, or unclip the ropes and create your own path,” says Mr Jackson.

“Depending on the choices those before you have taken, your path might be different each time. Your choices will also impact those who follow along behind you.

“In this way, Turumeke Harrington’s work invites us to think about journeys and how they relate to whakapapa – those who came before us, as well as the legacy we leave for future generations.”

Turumeke Harrington (Kāi Tahu) is an artist based in Pōneke Wellington. She has a background in industrial design and fine arts and has developed a series of playful and inviting sculptural experiences that consider whakapapa, space, colour and material.

Turumeke Harrington: Tātou tātou, nau mai rā has been generously supported by the Chartwell Trust and the Rātā Foundation.

Squiggla is a hands-on mark-making activity for young and old alike. Visitors will get the chance to create their own artwork, and learn a new technique for unleashing their imaginations.

“Often people can get hung up on the idea that art has to be perfect. Squiggla helps people to leave that behind and just have fun being creative,” says Mr Jackson.

Developed by the Chartwell Trust and supported by Te Rito Toi and CAST: The Centre for Arts and Social Transformation at the University of Auckland, Squiggla is a creative thinking programme that exercises the creative mind through direct, playful mark-making.

“Squiggla will give your creative muscles a great workout,” says Mr Jackson. “And hopefully many will continue the exercise outside of the Gallery as well.”

Squiggla has been generously supported by the Chartwell Trust.