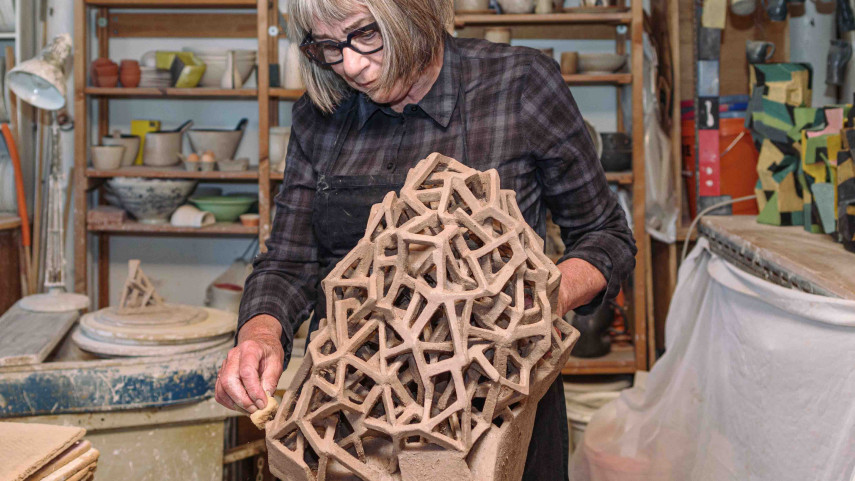 Shaped by Schist and Scoria is an exhibition that presents four significant multi-part works from celebrated local artist Cheryl Lucas’ 40-year career. It also introduces her newest installation, Subterfuge, made especially for the gallery in response to the COVID-19 pandemic.

“Cheryl is a leader in the field of art ceramics in Aotearoa,” says Lead Curator Felicity Milburn. “She works at an unusually large scale, making incredibly complex forms that respond conceptually to some of the most challenging issues of our time.

“Cheryl operates as close as she can to the edge of what’s possible – that’s what makes her work so exciting. These new works, especially, carry a tangible sense of experimentation and risk – they’re precarious and evasive, full of sharp angles and tangles,’’ says Ms Milburn.

“Cheryl’s home-mixed glazes produce colours that evoke a wide range of surfaces and ideas – from the fleshy pink-white udders of a dairy cow or the green-blue rivers of Central Otago, to the orange road cones and sludgy liquefaction that were such a part of life here in Ōtautahi just a decade ago.”

The installations included in Shaped by Schist and Scoria borrow their imagery from Lucas’ sheep-farming childhood in Central Otago and from the rubble-strewn aftermath of the Canterbury earthquakes.

“These older works combine the domestic familiarity and fine crafting of pottery with the messy, sometimes confronting realities of modern life. Skin Fence draws on Lucas’ memories of a fence strewn with rabbit pelts while Milkstock takes the form of distended cow udders.

“Royal Muntin Ware Ref. No. 6.3/2011, with its road cones and liquefaction-coloured vessels refers to what was lost in the earthquakes, but also what was found – the pottery remnants unearthed by the diggers that spoke of previous lives and art traditions.”

In the extraordinary new body of work, Subterfuge, Lucas again borrowed from her immediate environment and experience, working in the turbulent shadow of the COVID-19 pandemic. Taking inspiration from the divaricating plantlife distinct to New Zealand, which Lucas likens to the complex protective structures New Zealand created around itself during the early days of the pandemic, the disorientating, entwined forms of these 18 works reflect a delicate, constantly shifting balance between risk and protection.

“Subterfuge is very timely – in a world that can sometimes feel like it’s been destabilised by conspiracy theories, misinformation and hidden agendas, their twisting shapes and deceptive surfaces remind us that nothing is simple, or quite as it seems,” Ms Milburn says.

The exhibition is also being marked by the release of a new book Cheryl Lucas: Schist, Scoria and Subterfuge covering the artist’s previous and current work. With essays by Felicity Milburn and Kim Paton, it’s available from the Gallery’s Design Store.

Cheryl Lucas: Shaped by Schist and Scoria runs until 4 December 2022.