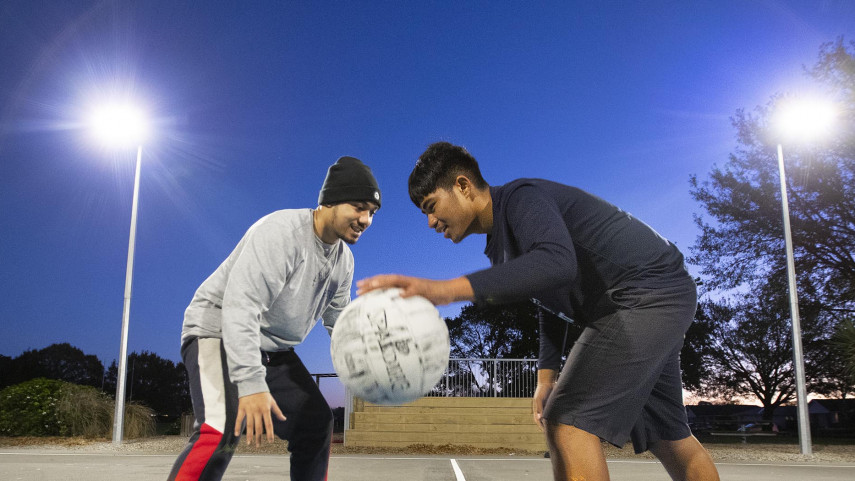 A Hoon Hay basketball court has been transformed into a well-lit community hub thanks to a group of motivated young men.

New floodlights, a sheltered barbecue area, tiered seating and extra picnic tables and rubbish bins have been added to the basketball court at Hoon Hay Park which has also been given a fresh coat of paint. Zachary Chin, 19, and Owen Lemusu, 15, make use of the newly-lit basketball court at Hoon Hay Park.

The group of 10 Pacific Island youths involved, who are now aged 19 and have known each other since they started school together at Rowley Avenue School, are all keen basketball players and they’ve been campaigning for improvements to their local court for four years.

With support from Cross Over Trust and Spreydon Youth Community Trust, they started fundraising when they were in their mid-teens before approaching the Spreydon-Cashmere Community Board for help.

They spoke at a Board meeting and later took part in the Council’s Annual Plan workshops to advocate for their ideas, accompanied by their mums. Their vision was to make Hoon Hay park a safe, well-used space that would be appealing to all generations of the local community.

Along with financial support from the Community Board and the Council they have also received grants from the RATA Foundation, Rotary Club and Lions Foundation.

Michael Pule, 19, who has been involved since the project began and is now training to become a youth worker himself, says he is proud the group’s ideas have been listened to and supported.

“The main part for me is having the adults and community back us, and now seeing it coming to life. I’m pretty pumped that we’ve had a youth voice and been listened to and been able to create a safe environment for the community.”

Basketball is so popular in the area that Michael and the other members of the group have started organising a Hoon Hay Hoops community basketball competition. The last event, held in 2017, attracted about 200 people.

This year’s Hoon Hay Hoops will be held in October using the new grandstand, lighting and other facilities is likely to be even bigger. The idea has also taken off in other areas, with a Hornby Hoops competition underway and one about to start in Bromley.

Cross Over Trust Community Worker Roy Kenneally says the youths involved are “stoked” with the final result after years of effort. “It’s a community-led project and gives power back to the people, especially in a community like ours which has twice as many kids as most other suburbs.

“They’re role models for the next generation and they’ve shown what can be done when you take ownership. They’ve learnt that if you really want something then you have to work hard to get it.”

Council Community Recreation Advisor Emma Pavey who has been involved with the group for several years says what they’re doing is “absolutely exceptional”.

“This is a real grass roots project that’s been driven completely by these young people. Their commitment and energy is fantastic. They’re so much fun to be around and they’re always willing to help out. They’re quite thoughtful boys and it’s fantastic that it’s all coming together for them.”

Mrs Pavey encouraged the young men to take part in Council-run Get Set Go workshops to learn more about organising community events and they have helped out with the Hoon Hay Fiesta and the Rugby League Pacific Series. “They’ve become really well-organised and they know how to run things themselves now.”